From 2006 to 2014 my primary activity was based around the Italian electro-rock band Elettrofandango.

I have developed several live environments based on real-time editing of found-footage images, video feedbacks, superimpositions, and sound controlled lights.

During the years we have tried to develop a personal idea of what a concert should be. The use of videos and lights had different functions: they create a visual narration that runs in parallel with the concert, which marks and differentiate every single song and moments of the concert.

I have experiment a variety of techniques and approaches including the use of digital video mixers (Panasonic WJ-AVE5), DVD loops, custom made software, self build analog hardware (video amplifiers and controllers), light bulbs, super-8mm film projections (on the kick drum), and a personal live painting technique. Also, I have occasionally played some instruments, recorded and composed sounds.

We have played in some of the most important clubs and festivals in Italy, Germany and Switzerland like: Hiroshima Mon Amour, Leoncavallo, Arezzo Wave, Curtarock, LPM-Live Performers Meeting, Unwound, Tiefgrund, Rainbow, Notte Noir, Living Room etc…

We have also collaborated several times (in studio and in concerts) with the legendary Italian artist, poet, and actor Remo Remotti.

“Their live set, energetic and suspended in a rock rhythm with synthesizer raids, is dotted with images throughout the room. An experience that goes far beyond the sound […] They speak for themselves. They tease a lot of applause, and finally get out of the already heard and classic rock’n’roll pose, even independent ones“.

“Time and space are relatively limited, but the live show is worthy of being remembered for passion, compactness and power. Sound spirals and gorges, in which the songs are often torn into rhythmic storms, where Giovanni Battista’s voice shakes in desperate screams. They impress for the structural anarchy of the first pieces, played between post-hardcore, riff stoners and noise deflagrations and the use of graphic art, projected in the background, with almost impressionist flavor, mixing fragments of old films and cosmic fractals.“

“The video projections are definitely one more tool for magnetize the audience to the stage. They create an environment.  The images an lights are something evocative and scenic, they depends on the type of atmosphere we want to create: tell stories, provoke mental pictures, creating a visceral experience. The images are treated like light sources. The stage, the venue, are dark.
At some point the projection -through optical sensors- transform the light and colors in audio signal. And this is just one of the solutions that we have implemented so far. But there are not only video, we also have loops in super 8mm film on which are engraved indecipherable phrases and unmentionable words. Thus expand the horizon and the experience of the concert into something -hopefully- more immersive and disturbing as possible.“

from an interview with Elettrofandango, 2009

Beside the live shows I have also directed three videoclips featured in online magazines and international festivals.

Exclusive for the DSLO music webzine

Exclusive for the Rolling Stone Italia

From here you can listen to two of our albums. If you are interested, you can request a physical copy at: live@elettrofandango.com

If you are in Japan, you can rent a copy of “In Quanto già Peccato” at the library of the Italian Cultural Center in Fukuoka.

In this section I have collected videos and posters of some of our concerts and tours. 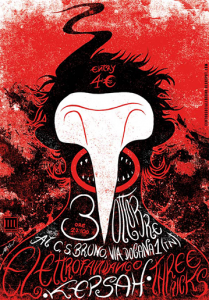 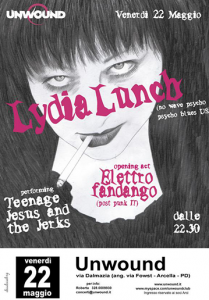 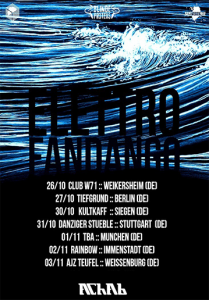 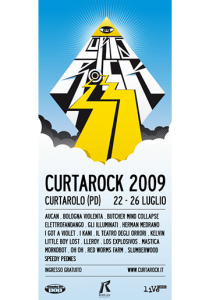